Why did Wetherspoon's shut down their social media?

In April 2017, Wetherspoon's made the announcement through their head office twitter account that they would be suspending their social media channels for all local branches, including head office with immediate effect.

With over 44,000 Twitter followers and more than 100,000 followers on Facebook, Wetherspoons most popular posts have received more than 500,000 views.

This sparked a wave of reaction - from the likes of Marketing Weeks Mark Ritson who called it ‘brand leadership at its best’. Many on twitter claimed that there had been a data breach and in light of Mark Zuckerberg being investigated for the misuse of personal information, Wetherspoons founder, Tim Martin, had decided to shut down all social media to avoid an investigation.

Wetherspoons chairman Tim Martin said: “We are going against conventional wisdom that these platforms are a vital component of a successful business.

“I don’t believe that closing these accounts will affect our business whatsoever, and this is the overwhelming view of our pub managers.XX

“We will still be as vocal as ever through our Wetherspoon News magazine, as well as keeping the press updated at all times.

“We will also be maintaining our website and the Wetherspoon app and encourage customers to get in touch with us via our website or by speaking with the manager at their local pub.”

As marketers staying in the loop with current technology gives us and brands a better grasp on what’s next to come. It is much safer and easier to dip your toe into social media, even if you don’t like it, to make sure you are at least on par with your competition.

Wetherspoon's giving up social media isn’t just them questioning a channel that is realistically still in its infancy. There is a risk about being current, Wetherspoon's demographic is broad and regardless of if they decide to ditch social media you can bet their audience won’t. New technologies are consistently around the corner and as a ever more tech savvy audience develops and moves on, will Wetherspoon's be in a position to move with them?

Why did Wetherspoons delete their accounts 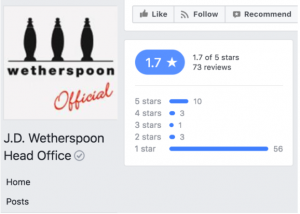