3 Kick-ass Women in Code You Should Know

2018 marks 100 years since women over 30 and all men over 21 got the vote. The Representation of the People Act 1918 was only partial suffragette, but it was a victory which drove the rest of gender equality.

However, 100 years on and still some of the biggest issues back then, although majorly improved are still very prominent in our culture. For example, the male dominated culture within Hollywood which started the #Metoo campaign this year, along with gender pay gaps being increasingly challenged - yet still happening. As well as a lack of role models in Science, Technology, Engineering & Maths (STEM) industries and unintentional gender bias. Join us as we celebrate our 3 kick-ass women in code that you should know this international women’s day!

Katharine Johnson was one of the leading brains behind the United States aeronautics and space programmes with the early application of digital electronic computers at NASA. She is best known for being the coder behind Glenn Friendships 7-month mission which was ran by machines who were prone to blackouts and hiccups in code.

Glenn asked engineers to “get the girl”—Katherine Johnson—to run the same numbers through the same equations that had been programmed into the computer, but by hand, on her desktop mechanical calculating machine.  “If she says they’re good,’” Katherine Johnson remembers the astronaut saying, “then I’m ready to go.” Glenn’s flight was a success, and marked a turning point in the cold war between the United States and the Soviet Union.

Karly Kloss, Victoria’s Secret Model turned coding activist all before the age of 25! 'KODE WITH KLOSSY' empowers girls to learn to code and become leaders in tech.

The campaign started in 2014 when founder Karlie Kloss began her own self-development learning to code. Kode With Klossy 'hosts girls’ coding summer camps, awards career scholarships to young female developers and helps create a national community changing the role of girls and women in tech'.

The programme breaks the stigma of girls not being suitable for STEM roles and encourages females to take these career paths, providing support as well as a community of women who have similar interests. 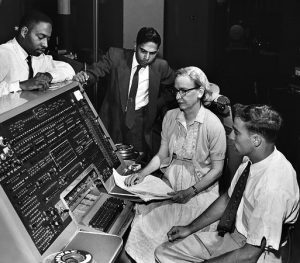 Often referred to as the Admiral of the Cybersea or ‘Amazing Grace’ for her many computer innovations, Grace Hopper is the reason many of us use the term ‘bug’ to mean a fault in a computer programme or system that causes it to produce an incorrect or unexpected result.

This term was coined when Hopper found an actual moth stuck behind the screen of her Mark II Aiken Relay Calculator. She then declared that the machine had been ‘de-bugged’ when she removed the moth from behind the screen.

So, there you have it. Three extra-ordinary women that pushed boundaries in our industry to radically change culture and the work that gets done day in, day out.